Mara stared at Valenia. The veiled dwelling in the rock fascinated her now just as much as it had when she arrived months earlier. The true exterior, hidden from human eyes, was magnificent. It wasn’t simply a cavern, but rather a grand fortress molded from an imposing mass of rock.

The summer months were moving quickly as Mara settled into her new home and became acquainted with the Dia living there. Mara spent much of her time with little Isa, wandering the golden beach and exploring the flat, wooded acres that bordered Valenia. She hadn’t gone any farther than that since they found the murdered family in the forest. The image of the young family, mangled and bloodied, still troubled her, along with the haunting memories of her mother’s own tragic end. Her nights had become a struggle to ignore the visions while her days were spent hoping they wouldn’t return with the darkness. But in spite of these tormenting dreams, Mara felt safe at Valenia, because at least there, she was never alone. 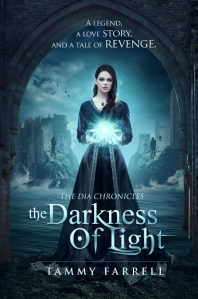 2 thoughts on “The Darkness of Light teaser”